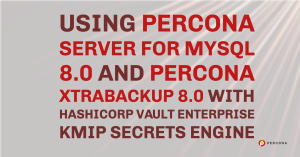 KMIP (Key Management Interoperability Protocol) is an open standard developed by OASIS (Organization for Advancement of Structured Information Standards) for the encryption of stored data and cryptographic key management.

Percona Server for MySQL 8.0.27 and Percona XtraBackup 8.0.27 now include a KMIP keyring plugin to enable the exchange of cryptographic keys between a key management server and the database for encryption purposes. The procedure to use them with HashiCorp Vault Enterprise is described below.

Export the license as an environment variable:

Create a configuration file to be used with the vault, vault_config.hcl:

Note: Vault root certificates and key need to be created separately and are not covered here.

Note: To configure and start the vault using systemd, refer to the instructions here.

This will generate five unseal keys and the initial root token.

The vault is unsealed.

To use the vault in any terminal, run:

Note: Here kmip is the default path of the secret engine and not the type of the engine.

By default, the kmip generates certificates in EC(Elliptic Curve). We need RSA for MySQL, so specify the certificate type (tls_ca_key_type) and bits (tls_ca_key_bits) to configure the kmip server.

The KMIP secrets engine uses scopes to partition object storage into multiple named buckets. Within a scope, roles can be created with a set of allowed operations that the particular role can perform.

Create a role within the scope, specifying the set of operations to allow or deny.

Client Certificate Generation for the scope and role created above.

Copy and save the CA certificate as ca.pem.

Generate a certificate in PEM format, and save it in a JSON file named credential.json.

Extract the certificate from the credential.json using jq tool and save it in a file named cert.pem.

Extract the private key from the credential.json using jq tool and save it in a file named key.pem.

The KMIP configuration is now complete.

Create the global manifest file(mysqld.my) in the mysqld installation directory.

Note: SElinux/AppArmor rules may have to be adjusted, so that Percona Server for MySQL and Percona XtraBackup can access the certificates.

Initialize and start mysqld with encryption options(add in my.cnf):

Create some encrypted tables and add data in the Percona Server for MySQL.

Stop Percona Server for MySQL and move the data directory to another location. Disable SElinux/AppArmor before restoring the backup.

Change the ownership of the copied files in the Percona Server for MySQL data directory to the MySQL user.

A database clustering system for horizontal scaling of MySQL

10 MySQL Tips For Everyone eBook

Data Virtualizer » MySQL -> what to do with NESTING_EVENT_ID

Oslo shooting near gay bar investigated as terrorism, as Pride parade is canceled

Limit Rows with the WHERE clause – MySQL Beginner Series