Mammon and Clauneck are the two most commonly summoned demons for increasing wealth and conditioning one’s mind in that direction. The Ars Goetia does not mention them. Bune is the primary demon whose wealth and prestige is proclaimed in the integral text of Western magick. The following describes Bune:

Bune (or Bim), is the Twenty-sixth spirit. He is a powerful, great, and powerful Duke. He appears in the form a Dragon with three heads. One is like a Dog, one is like a Gryphon and one is like a Man. He speaks with a pleasant and high voice. He changes the Place of the Dead and causes all the spirits that are under him, to gather at your Sepulchres. He gives Riches to a Man and makes him Wise and Eloquent. He gives true answers to all your questions. He also manageth 30 Legions of Spirits.

This information will help you summon Bune. I will explain the reasons why you should summon Bune and provide ritual instructions so that you can do it on your own, if you feel inclined.

From the Ars Goetia’s description alone we can deduce that Bune is a very versatile demon. Bune can offer unique and interesting services to a skilled magician.

Change the place of the dead

Only a small percentage of people are able to communicate with the spirits. Many people are haunted by the voices, visions, and dreams of the deceased who are struggling to survive in the afterlife. They want to expel them from the dark regions of the astral realm to bring them to areas that are more pleasant or fortuitous. Bune can only do this for the spirits of the deceased who are under his control, in the areas where he is the ruler. The deceased spirit should be questioned beforehand about his designated ruler.

Furthermore, Bune can only bring them as far as the “Sepulchres” (to be interpreted as an astral region) that the magician is preparing to enter in the afterlife or is already able to enter freely through astral travel. How can a magician determine which region it is? While there are many different ways of knowing (for example divination), if the magician has made a blood pact with another spirit to serve in the afterlife, it is this spirit’s region that the magician will find himself in, for a limited period of time or indefinitely, based on the Contract.

Give Riches to the Wise and the Eloquent

Most people summon Bune to achieve wealth and style. Bune always provides  a refined and classy avenue for making exorbitant amounts of money. Avenues that require a distinguished career, a high social status, and a lavish lifestyle. Think of political dynasties, celebrities in the movie and music industry and prolific best-selling writers as the greatest recipients of Bune’s favors and the ones that are already in large numbers waging a spiritual war under his banner.

Give truthful Answers to Demands

Bune can also be summoned to learn about current events, and the true causes of them, in your personal and global lives. Bune is not the most powerful demon to summon to dive the distant past and future. Astaroth is the best choice in such cases. 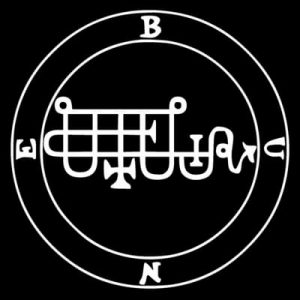 The following ritual is easy to use and can be used by anyone to summon Bune at varying levels. As always, the degree of success depend on the practitioner’s development and understanding of magick. By understanding, I am not only referring to theoretical “knowledge of the Mind”, but the intuitive “knowledge of the Heart” acquired by mystics and magicians after laborious initiatory trials.

The use of substances that can expand the senses before taking ritual action can enhance visual and auditory effects. I won’t mention any substances in this article. I don’t condone their usage by those with inadequate experience, and if you do have experience then you don’t need me telling you what to use and how.

Bune is visible in a visual sense. He appears as described in Ars Goetia, three heads resting on a Draconic body. Depending on your request, one of the three heads will communicate with you and be animated, the other two will remain frozen, like heads in a statue.

If you ask for favors related to the dead the head of the dog will become animated (association with Cerberus, the three-headed dog Cerberus can also be mentioned in this context). The head of a male will be animated if you request riches. This is because man is the most greedy creature on earth. If you ask for wisdom and answers, the gryphon will answer. In all cases, Bune’s voice remains the same – high and comely (refined, lovely).

I like to remind my readers that not everyone will be able to have direct communication with a demonic being, especially not when they first attempt to use ceremonial magic. So don’t be discouraged if you experience a lack of visual or auditory signs. In such a situation focus on what you can intuit from your emotions and “energetic” changes within the ritual space.

Let me offer some encouragement and advice. Impatience is one of the biggest mistakes you can make when it comes to magick. Many people will perform a ritual, then calculate how long it has been since then, and wonder when the magick result will finally arrive at their door.

This is a primitive and unrefined method of magick. Let go and let the demon do its job. If you want to help Bune realize your goal, then do whatever you can to help. You could try to make more money in business transactions or learn more about public speaking. But don’t sit impatiently at home with your arms crossed stressing about the impact of Bune’s influence or lack thereof.

Trust me, everyone, even those of us who’ve been dealing with demons for years and after having experienced real visions and exceptional material results still carry a small seed of doubt in our minds when things don’t manifest immediately. Guess what? But guess what? Most of the times, what you want arrives sooner than expected and it happens without any special announcements or fireworks. You’ll realize that it happened once it’s already been there for a while, because the way it manifested was very real and down-to-earth.

A Short Introduction to Alchemy

How to Calculate Numerology Predictions through Your Birth of Year